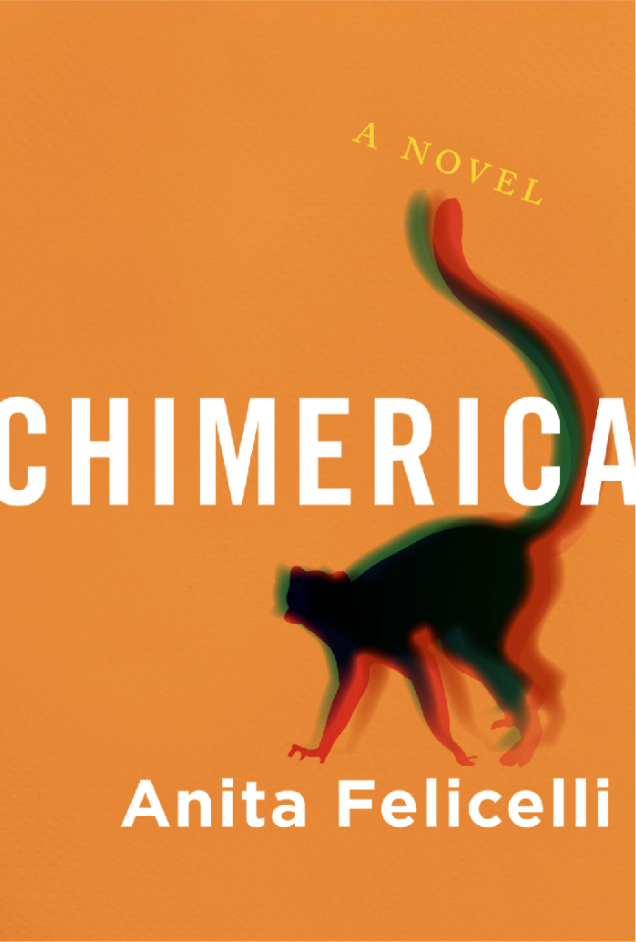 Down-and-out Tamil American trial lawyer Maya Ramesh fights to save a painted lemur come to life, and in settings that range from Oakland, California, to a Malagasy rain forest, becomes a champion for them both. In magical realist tradition Anita Felicelli’s satiric novel, CHIMERICA, looks at the inherent absurdities that drive systems of culture, power, and law. Fans of Marquez, Kelly Link, and Helen Oyeyemi will find CHIMERICA a spirited investigation of the ways in which art is codified and commodified—a contemporary philosophical novel about art, originality, and American culture.

“Felicelli’s remarkable CHIMERICA is a coolly surrealist legal thriller—in turns sly, absurd, emotionally vivid, and satirically incisive—that shifts the reader into a world just adjacent to our own.”
—Jonathan Lethem

“Felicelli’s prose is gorgeous…The best novel I can remember reading about the legal system and the way it intersects with women’s ambition and the so-called American dream…”
—Lydia Kiesling, Alta Journal

“Felicelli blends the matter-of-fact with the mysterious in this utterly unique and compellingly readable debut. CHIMERICA is more than the story of a woman coming into her own power; it’s a keen dive into the worlds of law, visual art, and marriage. You really couldn’t ask for a novel with better ingredients. Did I mention there’s a talking lemur? THERE’S A TALKING LEMUR.”
—Kelly Luce

“CHIMERICA is the novel about trial lawyers, talking lemurs, and public art you never knew you needed. Anita Felicelli’s charming prose and intriguing characters pull you in and keep you engaged. I’m thankful for this wonderfully odd, yet beautifully accessible novel.”
—Rajesh Parameswaran

“Anita Felicelli’s propulsive debut novel, Chimerica, almost dares you to try to categorize it. A legal thriller that builds to a climactic courtroom showdown. A heist drama that pits two scrappy underdogs against a preening art world celebrity. A magic realist yarn with an eye-popping premise in an everyday milieu. True to the hybrid mythological creature referenced by its title, Chimerica is unapologetically and effortlessly all these things. But perhaps most of all, it’s a work of cannily revisionist California noir, a genre that, in Felicelli’s deft hands, somehow encompasses all the others, reflecting the world we think we know back to us in all its strangeness… Is the novel’s use of neo-noir a means of borrowing, reassessing, and expanding the genre’s longstanding critique of a certain version of American life, or does Chimerica ultimately ask us to turn away from such a mythology, steeped as it is in anomie and isolation? Felicelli’s novel is too smart to decide for us.”
—Anna E. Clark, Los Angeles Review of Books